A mother black bear and her three cubs paid a visit to a house in Vilas to help themselves to a scrumptious late-night dinner.

The incident occurred on the night of April 23 and was caught on video.

“We woke up this morning (April 24) to a huge mess on our back porch. Reviewing video from our security camera revealed the culprits: A momma bear and three cubs. They helped themselves to the trashcan in which we keep seed, corn, and mealworms to feed the birds. They also tore down three bird feeders,” said resident Kenneth Kirksey.

Bears digging through trash and eating birdseed is nothing new in the High Country, however as Jim Hamilton from the NC Cooperative Extension pointed out, with so many people cooking at home these days due to restaurants being closed for dine-in customers, there is a lot of tasty trash leftovers for bears to sniff out.

“Trash should be secured in a closed garage or in bear-proof trash containers. Bears or any animals that acclimate to readily-available human food sources are going to stick around,” Hamilton said. “They’re going to make passes around the same bird feeders and the same trashcans until those aren’t available.”

Bear hunting has declined over the years in the High Country, and while black bears are typically skittish and not very aggressive, mother bears still have to teach her cubs how to survive in the wild. “Bear cubs hang out with their mommas for two years. She’s eventually going to kick them to the curb in the fall so she can mate again,” Hamilton said. “Male bears will kill younger bears so smart momma bears will raise cubs near humans as a calculated risk to keep them away from the male bears.”

It is also fairly likely that you could see a black bear at any point during the year as black bears don’t typically hibernate here because it doesn’t get bitterly cold for long periods of time.

“Bears up here don’t really hibernate. It doesn’t get truly cold enough here for bears to hibernate. They do shelter in place through the colder months and their metabolism slows, but I don’t think it gets to the point where it is considered true hibernation,” says Hamilton.

Video of the four bears is below. 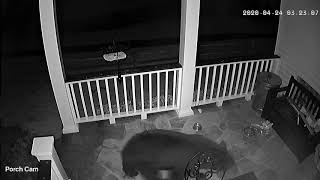