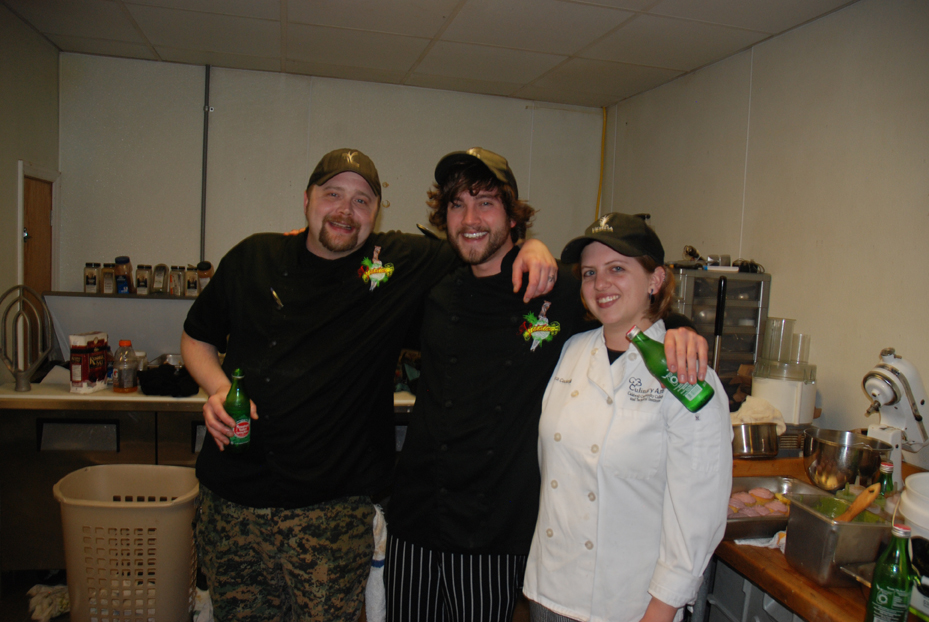 That’s how Jimmy Crippen, founder and creator of the state-wide event, described the Fire on the Rock finale where Red Stag Grill’s Adam Hayes out of Asheville won Tuesday night’s chef battle against Sam Ratchford of Vidalia in Boone by tenths of a point.
BY JESSE WOOD

April 19, 2013. John Dean of Twigs in Blowing Rock will meet Sam Ratchford of Vidalia in Boone to see who moves on to the Fire on the Rock finale to face Adam Hayes of Red Stag Grill in Asheville.
BY JESSE WOOD

April 17, 2013. Tonight, the fun at Fire on the Rock continues with chefs from two of Blowing Rock’s finest establishments going head to head: John Dean of Twigs and Julius Kalman of Canyons.
BY JESSE WOOD

April 11, 2013. Fire on the Rock steams ahead. Dean’s braised pork shoulder dish. On Wednesday night, two chefs of Blowing Rock establishments – John Dean of Twigs and Clark Barlowe of Heirloom – went head to head during the third contest so far in Fire on the Rock.
BY JESSE WOOD April 10, 2013. When Fire on the Rock founder Jimmy Crippen first came to Blowing Rock Fire Chief Kent Graham with the idea of hosting the inaugural Fire on the Rock at the Green Park Inn eight years ago, Graham said, “Nope. You can’t do that.”

It wasn’t because Graham, who has a culinary background, was against the idea of the competitive dining series. He thought it was a great idea, but he said he was against the open-flame cooking event happening at the historic Green Park Inn, which is well over 100 years old.

So Graham tried to discourage Crippen, who then called Graham back and asked, “What would it take?”

Graham gave a list of safety precautions that included the fire department present; fire extinguishers placed by each stove, fans to pull heat and smoke out of the rooms; and the execution of evacuation and crowd control plans.

After all of that, Crippen said, “OK.”
BY JESSE WOOD
Photo by Ken Ketchie

April 10, 2013. That’s “Redneck Sushi” to the left. Last night’s secret ingredient during the second contest of Fire on the Rock wasn’t quite as obscure as Monday night’s Siberian sturgeon. It was Goodnight Brothers Ham, which being from Boone is about as local as it gets.
BY JESSE WOOD

April 8, 2013. The taste buds were salivating and the pots were jumping on Monday night as Chef Craig Miller of Jackalope’s View in Banner Elk edged out Chef James Welch of the Green Park Inn in Blowing Rock to win the first competition of Fire on the Rock at Meadowbrook Inn.
Commissioner Perry Yates of Watauga County and his wife Anne-Marie were in attendance. This was the first Fire on the Rock Perry has attended, and he said he was so blown away, he would try to get tickets to the final if at all possible.
“The food was absolutely wonderful. I just had a fantastic time,” Yates said.
BY JESSE WOOD

April 8, 2013. The field is set, and the competition’s first battle is tonight. A few weeks ago, Fire on the Rock Founder Jimmy Crippen announced the competitors and battle brackets for the “Got To Be N.C.” Competition Dining Series at a press conference.
BY JESSE WOOD

March 7, 2013. The High Country’s top culinary talent has been selected and the battle brackets will be announced March 13 at 4 p.m. at Meadowbrook Inn & Suites.