Jan. 18, 2012. Including the winner from Blowing Rock, CEO’s from a wide range of companies throughout the nation participated in the iGATE CEO Cup golf tournament in Ponte Vedra Beach, Fla., several days ago for the chance to win thousands of dollars for the charity of their choice.

The event was played at the Stadium Course at TPC Sawgrass, a world-renowned golf course.

Chip Perry, CEO of Autotrader, was the iGATE CEO Cup grand-prize winner. His hometown is Blowing Rock, and he won $30,000 for the Watauga Humane Society.

Legendary golfer and nine-time major golf champion Gary Player presented Perry with his award, the world’s largest gold sports trophy, weighing in at 8.6 kilograms of gold and emblazoned with diamond and rubies, according to a press release from iGATE Corporation, a technology and operations company sponsoring the inaugural event. 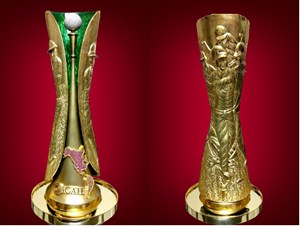 “This was truly a life experience,” said Perry. “To compete at this venue on this stage blew away all my expectations. Just the chance to compete was a privilege and to win was something I never dreamed of. Also, to be able to win money for a charity near and dear to me was just wonderful.”

Player, a Hall of Famer and one of five golfers to win golf’s career Grand Slam, conducted a golf clinic for CEOs playing in the event and participated in tournament receptions and the awards ceremony.

“The most important thing is that charity was the winner. Golf is the greatest catalyst of any sports to raise money, and it is wonderful that businessmen are giving their time,” Player said.