September 14, 2022 BOONE, N.C. — After T.C. Roberson sophomore dispatched Watauga sophomore Sienna Davidson in the No. 1 singles match on Sept. 13, some of the Pioneer supporters feared that the women’s tennis rematch results would be similar to the 7-2 drubbing on the Rams’ home court in Asheville on Aug. 24. By David Rogers for HighCountrySports.net September 13, 2022 It was another near-sweep of a conference opponent for Watauga women’s tennis on Sept. 12. This time, their Northwestern Conference victim was Lenoir-based Hibriten. The Pioneers lost only the No. 6 singles match to the visiting Panthers, going 8-1 on the day. By David Rogers for HighCountrySports.net

September 13, 2022 Even though Watauga’s Sept. 12 men’s soccer match will be recorded as a 1-0, non-conference loss to Northwest Guilford, the Pioneers left Jack Groce Stadium knowing they had battled toe to toe with one of the better high school teams in western North Carolina. By David Rogers for HighCountrySports.net September 12, 2022 The MANNA FoodBank will host another Community Market on Friday, October 14th at the Old Rock School Gymnasium in Newland.  The gymnasium is located at 185 Shady Street and is adjacent to Newland Elementary School. By Tim Gardner September 12, 2022 A rare opportunity to spend an evening with four amazing women with incredible stories of faith, love and redemption will be coming to the Avery County Senior Center in Newland from 6 p.m. – 9 p.m. on Monday, Sept. 19. Beauty from Ashes will welcome Paige Mast Blevins, Paige “Kayla” Townsend, Ella Peterson Autrey and Pam Corum Greer for an evening of fellowship, worship, inspiration and encouragement. Each one of these women has a different story to share, with the same theme — how a loving God can carry you through the darkest times in life. Watauga County’s Chad Cole, who also pastors Chestnut Dale Baptist Church in Avery County, is coordinating the event with the help of others in the area.  By Sherrie Norris September 11, 2022 The App State football team was welcomed back to Boone Sunday morning as hundreds of fans gathered to cheer for their Mountaineers after they upset the No. 6-ranked Texas A&M Aggies 17-14 on Saturday in College Station.

September 11, 2022 It was a day that included upset wins and nail biter losses for the Sun Belt Conference on Sept. 10, the athletic conference that defied recent national trends. Instead of broadening its geographic scope to create cross-country footprints like the SEC and Big 10, the Sun Belt opted to strengthen regional rivalries. Arguably the strongest “non-autonomous” athletic conference now, the Sun Belt registered significant football successes over the weekend. By David Rogers for HighCountrySports.net September 11, 2022 With the kind of time management that would make a Swiss watchmaker proud, Appalachian State rolled into the Longhorn State and took down nationally No. 6-ranked Texas A&M, 17-14, on Sept. 10. It was the second time in the Mountaineers’ program history that they upset a “top 10” ranked team, the first coming in 2007, against then No. 5 ranked Michigan. By David Rogers for HighCountrySports.net September 10, 2022 For three-quarters of the Sept. 9 high school football game between host Burns and visiting Watauga, both teams had answers. But with a 21-point scoring outburst in the fourth quarter that took advantage of Pioneer turnovers, the Bulldogs gave their enthusiastic home crowd a lot to cheer about in carving out a convincing, 48-28 win. By David Rogers for HighCountrySports.net

September 10, 2022 All but 1:20 had ticked off the game clock on Sept. 8, with West Caldwell holding a tenuous, 2-1 lead over Watauga men’s soccer. And that is when the game was called after a more than half-hour delay while school officials and EMS first responders tended to a seriously injured Warrior midfielder. By David Rogers for HighCountrySports.net September 9, 2022 Letters to the Editor. By TERRY OLDHAM / After reading Jay Fenwick’s response to Mark Murphy, I remained curious with regards to his endorsement of Newsela, the teaching supplement purchased by the Watauga Board of Education. I was neither for nor against Newsela and expected in advance to find both positive and negative aspects. Here’s what I found… September 9, 2022 Sept. 8 was a day of sweeps in Watauga middle school volleyball matches. In a tri-match between Hardin Park, Parkway and Green Valley, Hardin Park recorded a 2-0 win over Green Valley before Parkway tested the Eagles, forcing a third set with a nail biter, overtime win in the second frame. Parkway used that measure of momentum to dominate Green Valley. By David Rogers for HighCountrySports.net

September 9, 2022 Letters to the Editor. BY MARK A. MURPHY PhD, JD / In my prior Letters to the Editor of the High Country Press (on August 10, 22, and 30th) I raised very serious and specific concerns, and supporting factual information, about the “woke political indoctrination” and associated “woke” teaching methods that have occurred and are still occurring in the Watauga Public Schools.  In my August 30 letter, I stated my intent to formally submit a request to the Watauga Board of Education for an Agenda item for their September 12, 2022 meeting.  I did formally submit a request for a 10-minute Agenda item at that meeting, to discuss the factual evidence I have collected that supports my concerns.

September 8, 2022. Looking to stay up-to-date on what’s happening in your neighborhood? Want to keep an eye on criminal activity in your area? Take a look at these recent incident and arrest reports from the Watauga County Sheriff’s Office and the Boone Police Department.
Compiled by Harley Nefe September 8, 2022 On Saturday, Sept. 10, Three Forks Baptist Association in Boone is once again hosting a one-day mission outreach to show the love of Jesus in tangible ways throughout Watauga County and beyond. What started as “Operation InAsMuch” several years ago, High Country Impact does just what its name implies. Several of the churches within the TFBA will be participating, according to Director of Missions, Wesley Smith, describing some of the projects the churches are doing individually and collectively. By Sherrie Norris September 8, 2022 It was a straight set sweep on Sept. 7 at Lentz Eggers Gym, but visiting Hickory rallied to challenge Watauga volleyball’s roster depth, 25-11, 25-18 and 25-21. The Pioneers’ big hitters, seniors Caroline Farthing and Brooke Scheffler, powered their way through the contest with 22 and 11 kills, respectively. Scheffler added 18 assists to her stat line, along with a serving ace, two stuff blocks and eight digs, reflecting her balanced production all across the court. By David Rogers for HighCountrySports.net

September 7, 2022. Since 1978, National Grandparents Day has been observed on the first Sunday after Labor Day, albeit on a rather quieter note than most other special occasions. For some reason, it just hasn’t caught on, but I think most of us could agree that it should be celebrated for many reasons. It all started when Marian McQuade in West Virginia expressed concern for elderly residents in nursing homes and lobbied for such a day as a way to persuade grandchildren to tap into the valuable wisdom and heritage at their fingertips. It’s not just because I am a grandmother that I think it deserves more recognition, but because there is so much to be gained at the side of a grandparent, or snuggled up beside one on the couch, or even for the younger ones, on a soft, welcoming lap. By Sherrie Norris September 7, 2022 Local Chefs. Local Ingredients. Local impact. That’s what it’s all about, but throw in a little friendly competition among those chefs and you’ve got the perfect recipe for one of the most innovative fundraisers ever held in Boone.  By Sherrie Norris 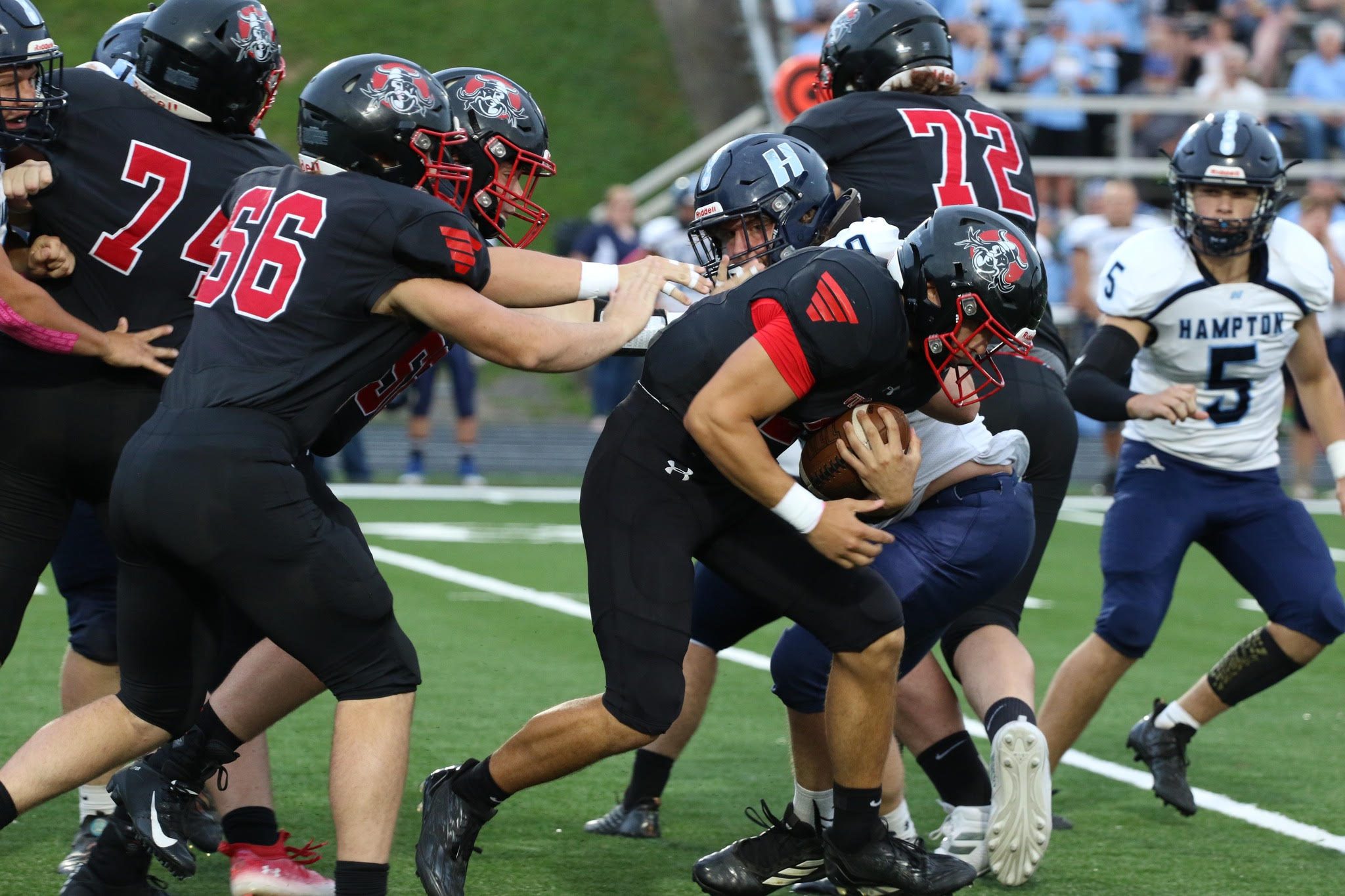 September 7, 2022 On Friday night, September 2nd, the Avery County High Vikings walked down their home stands carrying American flags as they came onto MacDonald Stadium’s field to face the number two-ranked school in Tennessee-the Hampton Bulldogs. Despite losing 36-27, Avery quickly erased any doubt that they could not only play the favored Bulldogs well, but also have a good chance to win. By Leah Potter

September 7, 2022 The spooktacular season of Tweetsie’s Ghost Train® Halloween Celebration, a popular fall family tradition, begins Friday, September 23, and continues every Friday and Saturday night through October 29. “If you are looking for somewhere to take the whole family during the Halloween season, the Ghost Train is the place to be,” said Cathy Robbins of Tweetsie Railroad. “We provide a fun and festive safe event for visitors of all ages.”

September 7, 2022 Turning off the pressure to be perfect and tuning into what makes each of us shine in our own way? That’s what being a Girl Scout is all about! Right now, Girl Scouts Carolinas Peaks to Piedmont (GSCP2P) is currently forming troops and recruiting new leaders for the new troop year this fall. All girls in grades K-12 are invited to join. Just imagine it- you and your forever friends. Dreaming up adventures. Making the whole world sparkle with your own magic. 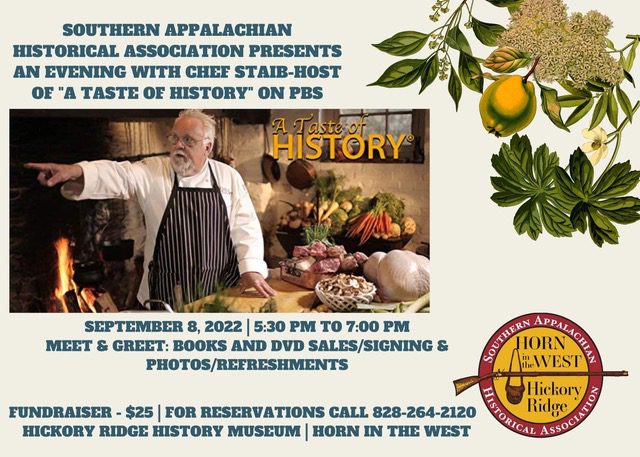 September 7, 2022 One of the most celebrated chefs of all times is coming to Boone on Thursday Sept. 8 for an event that is sure to capture the interest of seasoned cooks as well as beginners. Southern Appalachian Historical Association is presenting “An Evening With Chef Staib,” a culinary expert who is known and recognized far and wide for many reasons, primarily for his role as host of the PBS series, “A Taste of History.” An episode of that series will be filmed during the event, taking place from 5:30 – 7 p.m. at the Coffey Cabin within the Hickory Ridge Museum. A 15-time Emmy award winning chef and longtime TV host with over 40 years of culinary experience, Chef Staib has not only garnered his share of Emmys through the years, but also other awards, too many to mention. His “Taste of History” show takes the chef to kitchens across the globe, and as evidenced by his upcoming local appearance, all with a special interest in historic locations. By Sherrie Norris September 1, 2022. Avery County is the beneficiary of a grant that Spectrum has been awarded that will bring gigabit high-speed internet access to more than 230 homes and small businesses in Avery County. It’s funded by the North Carolina Growing Rural Economies with Access to Technology (GREAT) Program and is approximately $2.25 million in value. Combined with funding from the County of $250,000, that was used from the Federal American Rescue Plan (Coronavirus Pandemic Recovery) money it received, the total project investment is nearly $2.65 million. Charter Communications, Inc., is an American telecommunications and mass media company with services branded as Spectrum. Its Fiber-Optic buildout will connect Gigabit Broadband in the county with starting speeds of 300 Megabits per second (Mbps). By Tim Gardner