Oct. 11, 2012. The old Charles A. Cannon, Jr. Memorial Hospital, located just outside downtown Banner Elk, has been sitting vacant since 1999 when Cannon merged with Crossnore Memorial Hospital and moved to the new facility in Linville. Now, having been abandoned for over a decade, the building has badly deteriorated and has been subject to frequent vandalism.

In 1962, the Charles A. Cannon, Jr. Memorial Hospital replaced Grace Hospital III, which was opened in 1932. For almost 40 years the facility provided medical care for Banner Elk and the surrounding communities.

In a North Carolina general warranty deed dated Sept. 10, 2001, a 52.84-acre tract of land that included the hospital was sold to Shaunco, Inc., a corporation based in Hazlehurst, Ga. run by Olin Wooten, for $1.1 million. According to Banner Elk Town Manager Rick Owen, since that time, Wooten sold off most of the parcels of land around the hospital but still owns the 9.21-acre tract of land where the buildings are located at 805 Shawneehaw Ave.

According to Owen, there have been numerous attempts to find a buyer on the property, but to no avail. Owen said that to his knowledge, Wooten is “actively trying to move the property.”

“In my opinion, he has had some on-again off-again interest in it,” Owen said. “… The county was working with he and a potential purchaser maybe six months ago and we all hoped something would come out of that and it didn’t play out.”

Owen said at one point an offer was put forth to nearby Lees-McRae College to purchase the property, but they did not feel that the repairs on the building would be financially feasible and said they were not interested.

The closest Wooten came to getting the property off his hands and out of the Town of Banner Elk’s hair came back in 2007 when the Suchman Retail Group of Miami showed interest in purchasing and developing the property. They even went as far as to have design development drawings made to reflect plans for their development and went to the town to have the property rezoned to MU-Mixed Use (grocery store, retail, ski lodge, restaurants, office complex, multi-family or retirement facility). The plans, designed by Brockhouse Associates of Coral Gables, Fla., and dated Jan. 15, 2007, included three two-story retail stores, four two-story townhouses and a hotel with four-story and five-story towers and an indoor spa.

Ultimately, the plans fell through. Owen said he was not sure why things did not work out, given the lengths to which the retail group had gone to plan everything out, but speculated that perhaps it might have been a money issue.

Most recently, Wooten held an online auction for the property over the summer. Owen said there were several people bidding on the property but no one was aware that Wooten had a reserve price set on the auction. Ultimately, according to Owen, the highest bid never even got about $300,000 and Wooten’s reserve price was over $900,000.

On Wooten’s property listings website, he is currently asking $2.2 million for the property. Above that asking price are struck values of $2.3 million, $2.4 million and $2.6 million. The property has a current tax value of $1,009,300.

The building’s current condition may make the property a hard sell.

“There are some obvious issues with the age of the building and the deterioration of the building from it sitting empty for so long – due to vandalism – so there is some question as to if the structure is even usable as is,” Owen said.

“There is nothing that the town would like more than to have that eyesore cleaned up and utilized. It’s unfortunate that it sat there empty for as long as it has, but it is even more unfortunate the vandalism that has taken place. There needs to be some higher use of that property than a vacant building.”

To view the property record, visit webtax.averycountync.gov/RealEstate.aspx and search “Shaunco” where it says “Owner Last Name.” 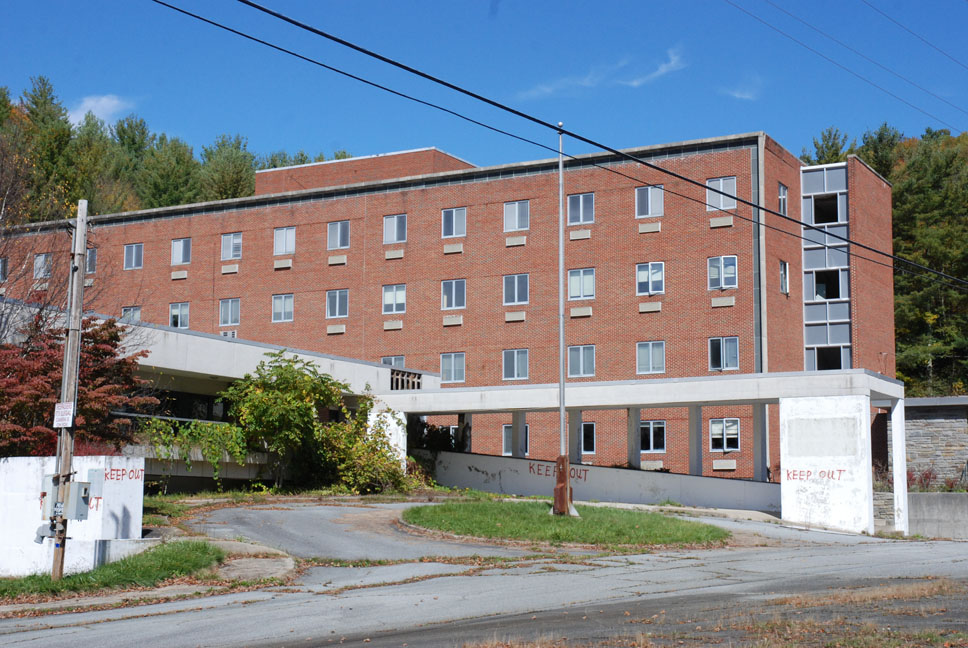