Local photographer Todd Bush staked out a spot in Elk River at a friend’s house over the weekend and was able to get two more terrific shots of Comet NEOWISE as it remains visible in the High Country for a few more days.

The first photo called “Chasing the Sun” was taken at dusk on Saturday evening. In the photo, it appears that NEOWISE is following in the same direction as the sun heading behind the mountains.

The second photo below is an excellent shot of NEOWISE and the International Space Station (ISS) appearing to cross paths high in the sky. The comet should remain visible in our area through the end of July. The comet will stick around through mid-August but the view will slowly diminish to the point where you will not be able to see it without a telescope. NEOWISE will not make a return to earth for approximately 6,800 years.

NEOWISE was first discovered on March 27 and scientists have estimated that the comet is three miles across and is also estimated to be well over four billion years old.

According to EarthSky, NEOWISE will be at its closest point to Earth on July 22-23 when it will pass 64 million miles from our planet.

Todd also included a short time-lapse video to show the perspective of our solar system that Comet NEOWISE is traveling through. 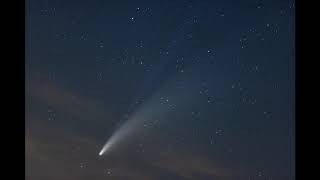