A large crowd of nearly 1,000 people from the High Country peacefully assembled and marched through downtown Boone as a show of support for racial injustice and the Black Lives Matter movement.

No arrests or acts of violence were reported from the event.

Video from the protest can be found below. 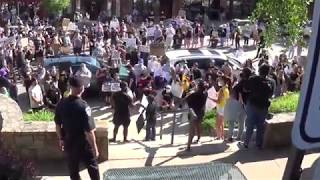