May 23, 2013. On May 21, narcotics detectives from the Watauga County Sheriff’s Office Special Operations Division executed a search warrant on the residence of 254 Tiny’s Mountain Drive, Deep Gap, NC 28618, subsequent to a narcotics investigation. 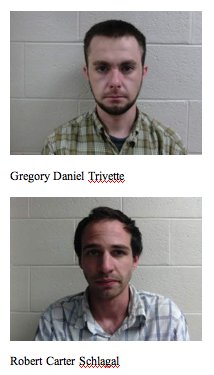 The follow-up investigation led to a search warrant issued for the residence.  During the course of the search warrant, detectives located eight methamphetamine labs, one of which was in a volatile state and required the SBI Clan Lab Response Team to respond to the scene.  The labs were rendered inert and disposed of, as well as the methamphetamine precursors.  Also located at the residence were three large Marijuana plants which were growing in a bedroom closet, ½ ounce of marijuana, and drug paraphernalia.

Trivette and Schlagal are currently being held at the Watauga County Detention Facility in lieu of a $25,000 secured bond and are scheduled to appear in District Court on June 26, 2013.

The investigation is still going and more arrests are expected.