It could not have been a much more perfect, sunny day in the High Country for the Town of Boone to honor former town manager Greg Young and current public works director Rick Miller.

The recently completed water intake on the New River in the Brownwood community was named for Young while the updated water treatment plant was named in honor of Miller.

“Originally designed and placed into service in the 1980s, the Town of Boone had two water intakes permitted with a combined capacity of three million gallons per day and an existing water treatment facility that could treat up to three million gallons per day. Boone’s need for an additional raw water supply was identified in a 2004 water system hydraulic analysis. Subsequently, 27 different source locations were evaluated all the way from the Watauga Lake to the Yadkin Valley, but this site was located as the most suitable and able to meet Boone’s 50-year water projection needs,” said current town manager John Ward.

Ward said that the most recent data figures show that Boone has a current population of 19,562, not counting the students enrolled at Appalachian State University, which totals 19,108. Those numbers pushed the need for this third water intake area and upgrading the water treatment facility. The facility can now treat 4.5 million gallons of water per day.

“The project, which is the largest public project completed in the town’s 147-year existence, cost just over $42 million and was made possible in part by grants provided by both the USDA and NC Rural Center, as well as the funding from the citizens and users of the water in Boone,” said Ward.

One of the most important accomplishments with this project along with the additional water supply for the town was the use of the latest technology available to balance how much water is actually pulled from the New River. According to Ward, the raw water that is sent to the water treatment facility through the pump station is located in a large pit beneath the facility. The water levels inside the pit and the water flow from the river are equalized.

“The infiltration gallery in the river here is the first of its kind in the state and in the region. It has been designed so there will be minimal negative impacts to the river aesthetics, recreation and flow,” Ward said.

Loretta Clawson, current Mayor Pro Tem for the Town of Boone, spoke briefly about Greg Young and his impact on the project, which began while he was town manager of Boone. Young was also a key figure in the town purchasing the historic Appalachian Theatre as well as overseeing the creation of the many parks in Boone, converting the town’s fire department from a volunteer force to a staff of trained, paid firefighters and helping the town police department acquire the latest technology and training available.

“Through it all, he demonstrated a calm demeanor and steady hand,” Clawson said. “One of Greg’s lasting and most important accomplishments is the development of the town’s new water intake. This project, which was complex from the beginning due to the distance of a suitable source of water, engineering, land acquisition challenges, and many other obstacles, had to be overcome. Yet, Greg believed in the importance of the intake to the future of Boone and he persevered through these obstacles and challenges to bring the project to the point where John Ward could bring it into operation.”

Clawson worked with Greg and Rick during her time as the town’s mayor. She had a lot of glowing remarks as well for Rick who still serves as the public works director and grew up in the Meat Camp community. Miller began working in Boone part-time in 1985 and took a full-time maintenance position with the town in 1987.

“In 2015, the department of public works and public services were combined with Rick being designated as director of the newly-consolidated public works department. The Town of Boone Raw Water Supply Project would occupy half of Rick’s professional career here with the town of Boone,” Clawson said. “Rick has weathered many storms, both professionally and personally, during this long journey, staying the course all along. If Rick’s tenure with the Town of Boone could be summed up with one word, it would be perseverance. Thank you so much for your dedication to the Town of Boone.”

Robert Hosford, who is the North Carolina Director for USDA Rural Development, was on hand to congratulate the town members for their major achievement in planning for the town’s water future.

“You have planned for your future. I see a lot of rural communities that aren’t thinking about what we will look like five, 10 or 20 years from now, but you all have taken a step in that direction and I applaud each and every one of you,” said Hosford. “$42.3 million, that sets you up for 20 years of growth and the right type of growth and I really hope some other communities this size will engage in this.” 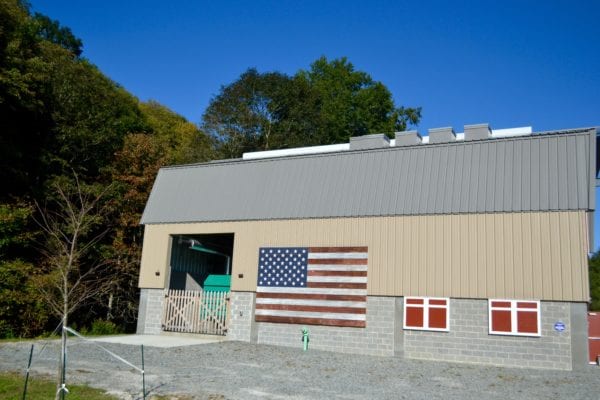