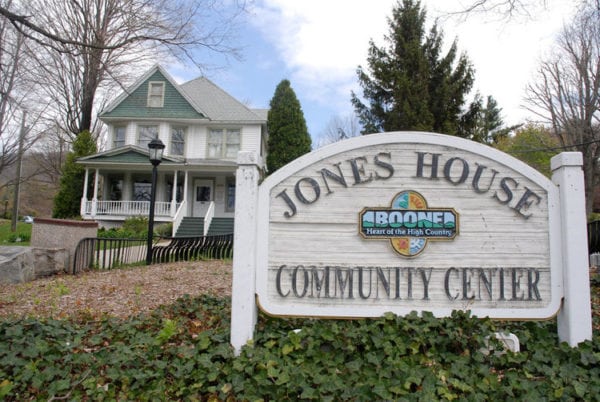 The indoor house concert series continues at the Jones House Cultural and Community Center Wednesday, Oct. 3, with an evening performance that will showcase seven Irish and Old-time musicians across North Carolina and the east coast.

The concert—part of a collaborative series between Black & Global Roots Concerts and the Town of Boone’s Cultural Resources Department—will feature Claudine Langille, Zan McLeod, Cora McGovern, Fiddlin’ Al McCanless, Will McCanless, Colin Shoemaker and Bob Vasile.
Claudine Langille and Zan McLeod are longtime explorers of the commonalities and intriguing differences within Appalachian music and the Celtic musical traditions. The two are co-founders of the band Touchstone, a wildly successful Irish and North Carolina group whose recordings are cited as influential by musicians in the United States and Ireland.
Langille sings a lot of the traditional songs and is widely recognized for her excellent mandolin and tenor banjo picking. She currently lives in Vermont, where she performs with the band Gypsy Reel, runs a folk music club and teaches in the Celtic Music Academy of Massachusetts.
McCleod currently resides in Washington, D.C., where he is a fixture of the traditional Irish music scene. He is known for his driving rhythm guitar and intricate arranging. McLeod has performed on over 150 albums, including playing with The Chieftans. He is also known for having helped to find Warren Wilson College’s Swannanoa Gathering, his teaching and as a regular staff member of music camps at Augusta Heritage Center and Boston College’s Gaelic Roots Program.
Cora McGovern is an accomplished keyboard and whistle player from Doolin, County Clare, Ireland. She received a music degree in Ennis and has been a live accompanist for many stars of traditional Irish music, including Frankie Gavin, Christy Barry and the late Miko Russell. McGovern will accompany Langille and McLeod as a special guest for the concert.
Fiddlin’ Al McCanless is one of the most versatile fiddlers on the North Carolina music scene. He co-founded the New Deal String Band, a pioneer “newgrass” group, and he continues playing bluegrass with former New Deal bandmate, Leroy Savage. McCanless spent many years as fiddler for the Bluegrass Experience, which won the World Champion Bluegrass prize at the famed Union Grove Fiddlers Convention. He has recorded with The Red Clay Ramblers, Mike Cross and Alice Gerrard. McCanless is also a fan and practitioner of Irish music, and has performed with bands Celtic Jam and Contentment Is Wealth. McCanless’s son, Will, has become an excellent musician as well, and he will join his father as part of the performance on bouzouki and guitar. Asheville’s Colin Shoemaker will also join Fiddlin’ Al McCanless on whistle and flute.
Bob Vasile is a guitarist and virtuoso bouzouki player steeped in Irish traditions and is no stranger to other styles of folk music. Recently, he performed in a duet with Jane Peppler as Pratie Heads. In Dirty Linen, critique Steve Winick said Pratie Heads “created some of the best Celtic, English, and early American folk music available in recorded form.” In the 1990s, Vasile performed in the group Acoustic AttaTude, touring as an opening act for Bela Fleck and the Flecktones. Vasile is the winner of the 1996 Wayne Henderson Music Festival guitar championship, a coveted and highly competitive regional guitar competition.
The Oct. 3 showcase is sponsored by Black and Global Roots Concerts, The Town of Boone, Appalachian State University, and the National Endowment for the Arts.

The evening concert will start at 7:30 p.m., with doors opening at 7:00 p.m. The workshop and concert take place in the Mazie Jones Gallery of the Jones House in downtown Boone, located at 604 W. King St.

The next concert will take place Saturday, Oct. 27, featuring old-time and bluegrass legend and song writer Alice Gerrard, along with her band, including Jim Watson, Chris Brashear and Cliff Hale.
Tickets for all concerts are $20. Because seating is limited to 40 people, advanced reservations are recommended, although tickets for open seats will be available for purchase at the door. To make a reservation for the concert or to find out more information about the indoor concert series at the Jones House, visit www.joneshouse.org or call (828) 268-6280.