4pm-10pm Get Lost for a Cause with F.A.R.M. Café. Join us for A Real. Good. Fundraiser with REAL.GOOD.BEER., REAL.GOOD.PIZZA., REAL.GOOD.MUSIC!, and REAL.GOOD.DOOR PRIZES!!!
Live Music includes Evan Button, Ingrid & Victor, and Jazz from TODD WRIGHT!
Proceeds go to support F.A.R.M. Cafe’s efforts to Fight Food Insecurity here in the High Country!

7pm-9pm Trivia Night: Beginning at 7pm, Lost Province will be hosting Trivia Night. Compete on your own or on a team! The competition gets started at 7pm so come a little early for a pizza and a pint and get your seat!

7:30-Close Live Music: Alexa Rose. Virginia-born singer-songwriter Alexa Rose spent her formative years writing songs on a hand-me-down guitar in a little mountain town, and scaled down the Blue Ridge to settle in Western North Carolina in 2013. She has been called a “rising voice of the region,” sharing the stage with artists like Joy Ike and Jessica Lea Mayfield, and winning Asheville’s acclaimed Brown Bag Songwriting Contest in 2016. Rose’s sophomore album “Low and Lonesome” is, at heart, a folk songwriter’s album; the simple arrangements lend themselves to the frankness of Rose’s masterful phrasing, allowing the natural beauty of her warbling soprano to transport the listener to new places through familiar territory.  Rose’s nonchalant delivery ebbs and flows in optimal sync with her band. The album features Pretty Little Goat Stringband members Tim Fisher on fiddle and JT Linville on bass.
Friday December 16

7:30pm-Closing Live Music: Amantha Mill. Amantha Mill has honed their sound and performance to include musical types from traditional Bluegrass to Swing, Cowboy, Country, and Americana/Roots. There is something in each of our shows that will satisfy everyone. Each member of Amantha Mill has a long history in their particular musical instrument and vocal talent. When joined, it all comes together to form tight harmonies and an explosive, energetic sound that pays tribute to our Mountain Music Heritage.

8:30pm-Closing Live Music: Dashboard Hula Boys benefiting the Junaluska Heritage Association. The Dashboard Hula Boys, a Boone, North Carolina based acoustic trio, are Ed Midgett (guitar), Bob White (bass), and Tom Whyte (harmonica, uke, tenor banjo). They play favorites from old-time blues to classic rock along with a few originals. To describe them as eclectic or eccentric would be limiting. They perform fully clothed at venues such as festivals, clubs, wrestling matches, celebrations, and secret society initiations, to name a few.

Lost Province Sunday: Residents of “The Lost Province” (Watauga, Ashe, Avery and Alleghany) receive 10% off food with verification of residency.

** Come sing in Christmas at BRAHM with our wintertime sing-along!
We’ll enjoy cider while sharing carols and other Christmastime tunes!
Our host, Saro Lynch-Thomason, will teach a few songs from English
wassailing traditions, a practice going back to medieval times in
which peasants would sing for cider, gifts and food at the homes of
nobles. Participants are welcome to bring seasonal songs good for
singing in groups!
————————————————————

“Everyman Jack” takes a detailed look at over one hundred original
prints and illustrations created by Gail E. Haley for several of her
books, including “My Kingdom for a Dragon,” “Mountain Jack Tales,”
“Birdsong,” “The Green Man,” and “A Story, A Story.” Haley is best
known today as an artist, illustrator, and writer of children’s books.
She has written and illustrated close to 50 books throughout her
career. She is the only person to have received both the Caldecott
Medal and the Kate Greenaway Medal for art. Haley’s original prints
and illustrations from 10 of her books make up this exhibition. Many
more of her books are available to read within the gallery.
Image Credit: Gail Haley. Original illustration from Jack and the Bean
Tree. Mixed media on wood panel. Private collection.

** November 19, 2016 – April 8, 2017
————————————————————
American artist Andy Warhol (1928-1987) was the leading figure in the
Pop Art movement during the 1960s. He launched his career with his
well-known Campbell’s Soup can paintings. He is recognized for the
work he and his assistants developed in his Warhol Factory in New York
City, where printmaking, painting, photography, and film were employed
to churn out thousands of works of art. Warhol redefined the artist’s
role in the creation of artwork, the art market, and the recycling of
popular imagery as high art. The Andy Warhol Foundation for the Visual
Arts, established in 1987, completed years of planned giving through
the donation of his unsold work to educational institutions around the
world, including the Turchin Center for the Visual Arts in Boone, NC.
This exhibition features six original silkscreen prints from the
Turchin’s permanent collection that are out-of-edition. This means
that they were created during the original print run, but did not make
the cut when Warhol
decided what would be included in the final print release.
On loan from the Turchin Center for the Visual Arts
(http://BlowingRockMuseum.us9.list-manage1.com/track/click?u=58a927d92e24acf7ea8b5e40c&id=0bf814be02&e=186aa2a2e6)
, Appalachian State University.

Give the Gift of Flight This Christmas with Wilkes Discovery Flights 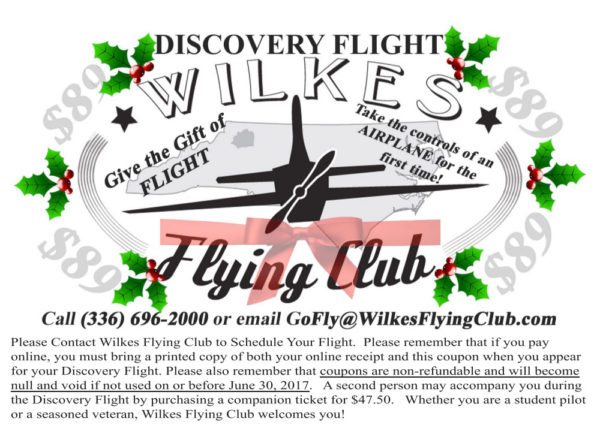 The Winter Music Fest also includes two additional events beyond the music: a benefit dinner at First Baptist Church of Morganton and the After Party, serviced by Countryside BBQ of Marion, Appalachian Mountain Brewery and Cidery of Boone, and Brown Mountain Bottleworks of Morganton.  Entry to these VIP and Deluxe ticketed events are only available through Casting for Hope co-founders John Zimmerman ([email protected]) and Taylor Sharp ([email protected]).

All proceeds from this event will go toward Casting for Hope’s work to serve women and families in western North Carolina who are battling an ovarian or other gynecological cancer.  Casting for Hope’s service arc focuses on financial assistance to offset the financial obligations its patients are facing as a result of their diagnoses and treatment and retreat programming to provide patients and caregivers long weekends at the Casting for Hope Retreat Center far away from clinical settings and oncology offices.