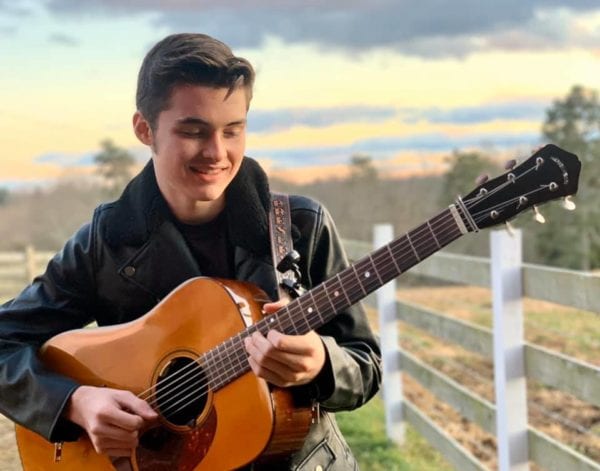 On Friday, February 21 at 7:30 p.m., local flatpicking phenom Presley Barker will delight audiences as he brings his signature rockabilly style and effervescent charm to the stage as a part of the Jones House Spring Indoor Concert Series.

“There is a wealth of young gifted musicians here in the High County,” claims Boone Cultural Resources Coordinator Brandon Holder. “We are honored to have talented up-and-coming artists like Presley Barker continue to perform here at the Jones House.”

A native of the Appalachian mountain region, Barker first picked up the guitar at the age of 7. Early on, Barker showed an aptitude for flatpicking, a style of playing pioneered by the likes of Doc Watson, whose music Barker grew up listening to. Over the years, Barker has been influenced and mentored by some of the region’s best bluegrass musicians, including Wayne Henderson, Steve Lewis, and Bryan Sutton.

In recent times, Barker has performed across the U.S. in some of the nation’s premier folk and bluegrass music festivals. His list of accolades is ever-growing as his flatpicking has earned him top prize at numerous competitions including the Galax Old Fiddler’s Convention, the West Virginia Flatpick Contest, and the Wayne G. Henderson Guitar Competition, among others.

Likewise, Barker has played guitar alongside many of the industry’s greats, most notably with Ricky Skaggs at the Grand Ole Opry. Throw in a number of national television appearances, a solo album featured on the Bluegrass Today Airplay Chart, and a solid touring schedule, and you’ve got all the groundwork for a celebrity in the making (if not already made).

At the age of 15, Barker continues to expand his musical repertoire, infusing elements of country, blues, and rockabilly into his performances. More significantly, he seems to be developing a personal panache – a stage persona that is a throwback to 1950s rock ‘n’ roll icons like Jerry Lee Lewis and Buddy Holly.

Maybe it’s the youthful vibrance, winning smile, and down-to-earth Southern charm; maybe it’s the newly-discovered, easy-on-the-ears, smooth, bluesy voice; maybe it’s the fetching vintage look – sideburns, slicked-back hair, and black leather jacket. Whatever it is, one can’t help but draw parallels to another with the name “Presley” – the King himself, Elvis. One thing’s for sure, however – Barker is no impersonator, as he is carving out his own niche in the music industry.

Immensely talented, enthusiastic, humble, and on the up and up, the climbing trajectory of Presley Barker’s career shows no limit. Having already performed on the grandest stages, audiences will not want to miss this opportunity to see this homegrown sensation perform in the intimate 40-seat Mazie Jones Gallery.

Tickets are $20 and can be reserved by calling the Jones House at 828-268-6280 or emailing [email protected] For more information about Presley Barker, the Spring Indoor Concert Series, and other events at the Jones House, visit joneshouse.org.