This is considered a major metric in determining our overall COVID status. Three weeks of consecutive leveling is encouraging, but the absence of a downward trend is notable. 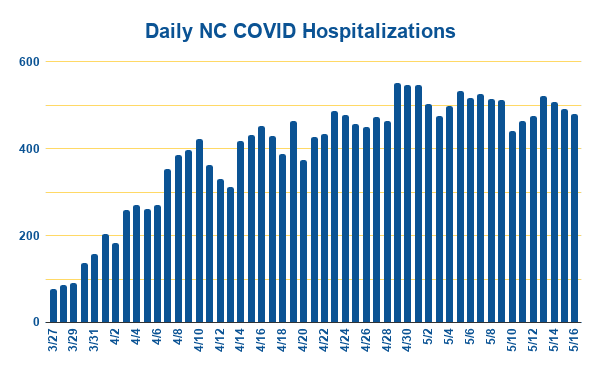 EASIER TO GET TESTED

We’re still seeing an erratic but upward trend for testing: 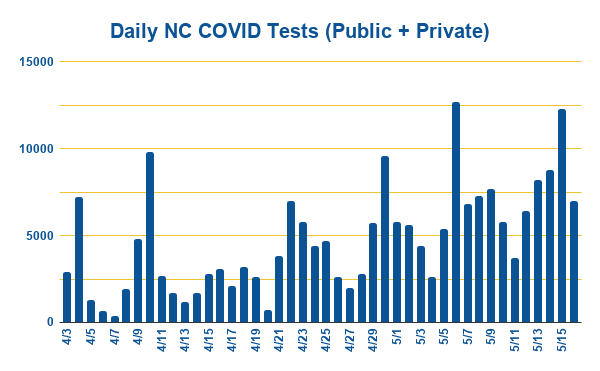 Our seven-day rolling average is about 6,000. We still need to raise that significantly.

But there were two significant developments with testing this week:

1) DHHS relaxed the eligibility criteria for who can get tested. Previously, you had to be heavily symptomatic and have a negative flu test. Now, it’s “anyone with symptoms suggestive of COVID-19” or “regardless of symptoms, anyone at a higher risk of exposure or higher risk of severe infection.”

This is good news. It shows real confidence in our ability to scale up testing in a way that will allow us to – hopefully – rapidly identify and contain future outbreaks. This was only possible because a lot of different pieces came together – and because we bought ourselves enough time to get there.

2) DHHS published a list of roughly 200 sites across the state that offer testing. Some of these are hospitals, others are clinics or pop-up sites. Many of these locations are new, which shows not only increased testing capacity but more distributed testing capacity, which is key.

There’s going to be a big debate about vote-by-mail in the state legislature.

But – no matter what side you’re on – you should know that you’re still eligible to vote by mail via absentee ballot this November.

North Carolina has what’s called “no excuse” absentee voting. That means everyone who requests an absentee ballot can get one, regardless of reason.

To request an absentee ballot, you have to complete and mail this form to your county board of elections no later than 5:00 p.m. the Tuesday before the election.

(Yes, you should be able to make this request online instead of printing and mailing it. I’m working on that. But don’t wait to see if we actually pass that law – just do it this way and be done with it.)

For hundreds of thousands of North Carolinians, the most important issue right now is the inability of our Division of Employment Security (DES) to process unemployment insurance claims and send out checks in anything resembling a timely manner. If you’re just now hearing about this, consider yourself fortunate.

We all know that DES was hit with a tsunami and the number of daily claims is now 10x the normal number. But it’s been eight weeks and there’s still a major backlog. So what’s going on?

They’re getting an average of 50,000 calls per day. Last week, only about half the calls were being answered. Now it’s up to about 80% (assuming you’re willing to wait on hold for several hours). There is also a chat function that was recently added to relieve phone pressure. 230 people are staffing the chat function with another 100 being added next week. The chat function is serving roughly 6,000 people per day.

Right now they’ve got 1,100 employees answering the phones each day. As of Monday they’ll add another 350. That should – they say – give them enough capacity to handle the average daily call volume.

BUT – even that isn’t really sufficient. They really need to staff beyond average daily capacity to make sure they bring down wait times and can handle days (like last Monday) when calls topped 70,000.

AND – it’s not enough to just answer the phone. They have to make sure the person who answers can actually help. And that’s been an issue. There have been many, many reports of employees not knowing what to do and transferring people only to have the call get disconnected. There are basically two groups of employees who are answering the phones: Ones who work for DES and ones who work for a call center group called Maximus which was contracted to add capacity. The Maximus folks are doing most of the phone answering. Their training process has been expedited and as a result a lot of these folks don’t really know the unemployment insurance regulations very well, which is leading to a lot of frustrating conversations. For a lot of them it’s their first or second week on the job and they only know marginally more about this than the people calling. This is an especially serious problem given that the online applications can be confusing and individuals who need clarification or to correct an entry need to call DES to get guidance. DES urgently needs to provide supplemental training based on the most common problems they’re hearing from callers. These folks need to level up – quick.

So let’s talk about what it means to be “pending” and why so many people haven’t heard back after submitting their claim.

And that gets to the second problem – not having enough staff to process claims.

That’s a major backlog of unpaid claims, and it’s leading to folks flooding the phone lines asking, “What’s going on with my claim? It’s been 2/4/6/8 weeks?”

There are approximately 600 DES people available to process claims. Those are basically the only people who aren’t manning the phones all day. Clearly, this number is insufficient. Not only does DES need to expand its processing staff to clear this backlog, but it needs to develop certain automation procedures to help move even faster. Right now, they say they are developing a plan for doing both of those things.

And right now you’re saying, “What do you mean they’re developing a plan?? It’s been eight weeks!”

And that gets to the truly frustrating part about all of this.

DES was certainly hit with a tsunami. We were all sympathetic to their situation at the beginning of all this because it was truly unprecedented and they were swamped.

And since that time they’ve taken their staff from roughly 500 to 2,600, which is a major increase.

And to still be under-staffed eight weeks into this crisis is simply unacceptable. To be in “plan development” at this point in the process is a major problem. We should be well into plan execution by now.

For example: They obviously should have switched to 24-hour operations weeks ago. No good reason that didn’t happen.

Both parties in the legislature and the Governor are now clearly and intently focused on this. We are getting dozens of emails a day from constituents about this and we are not going to let up. There’s no more benefit of the doubt. There’s no more sympathy for an overburdened system. The only thing that matters at this point is actually getting people their checks so they can put food on the table and pay rent.

ALSO – many of you have specifically asked about when PEUC is being implemented. According to DES, that will occur this Friday. If you have exhausted your regular unemployment benefits, they are asking that you do not apply for the PUA program but apply for PEUC instead. The PUA program is just for people who are not normally eligible for state unemployment benefits, like independent contractors and self-employed workers.