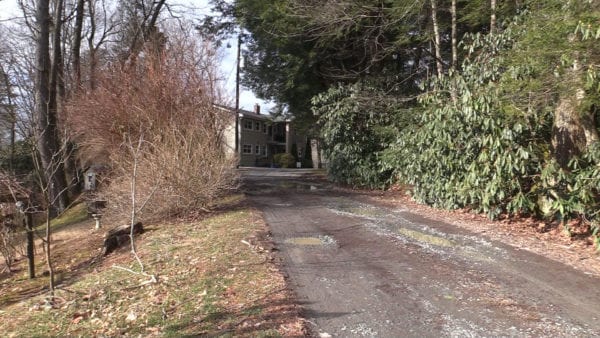 A quiet Blowing Rock neighborhood has found its tranquility challenged—some say ruined—by noise, traffic, by non-residents’ cars blocking access, and by strangers reportedly seen crossing adjacent properties day and night. Those complaints prompted action on the part of the Town of Blowing Rock, action centering on the apparent illegal use of the property by the owner’s allowing short term renters. In the midst of this controversy, it appears the property is for sale, listed by several on-line sources.

The Town’s investigation into these complaints led to an order for the owner of 163 Wilmot Circle to stop short term rentals—defined as any rental of less than 28 days. That Town action prompted property owner Chad Frazier and his Greensboro attorney to file an appeal of the Town’s Final Notice of Violation to the Blowing Rock Board of Adjustments. Frazier’s claim is that his property has a grandfathered right to make short term rentals of his three units at the Wilmot Circle address. The property is just off Wallingford Street behind Rumple Presbyterian Church in an R-15 single-family residential zone, where short-term rental of property is not permitted in Blowing Rock.

The hearing that followed turned into a marathon five-plus hour session last month at Blowing Rock Town Hall attended by Frazier, impacted neighbors and their attorney, and a number of Blowing Rock residents concerned about damage that might result from a precedent setting expansion of short term rentals.

But the ramifications surrounding short-term rentals are being felt across the state and country in towns large and small.

Short term rentals promoted by Airbnb and other major international companies have impacted –some say destroyed—a number of second home communities in the US. One community, Sedona, Arizona, is cited as an example as residents of the upscale community say they’re finding rental communities are destroying their home values.

While Blowing Rock has dealt with noise, traffic, and parking complaints on this particular property, Charlotte has seen short-term rental properties used for large parties, some ending in gunfire. Last summer, WRAL reported that the Raleigh City Council approved rules for Airbnb rentals; including limiting them to two adult guests at any time and prohibiting the rental of more than two rooms in a home. The rules took effect in January, with violations bringing a $500 fine.

WRAL also noted that Asheville, Nags Head and other cities across the state also have adopted restrictions on short-term rentals for zoning and public safety reasons.

The Blowing Rock hearing is the continuation of an appeal to the Board of Adjustments by Frazier in January of 2019 that he lost in a unanimous decision by the Board that found short-term rentals at his location to be in violation of theTown’s R-15 residential zoning.

On the state level, individual members of the Blowing Rock Civic Association and others from the High Country made their concerns known to 93rd District State Senator Ray Russell and other legislators when Airbnb and others began working with legislators on state-wide laws that would take away local control of short term rentals. Russell’s office says that—for now—such efforts have failed in committee and no such proposal is currently on the table.

Blowing Rock records show that the Wilmot Circle property was built in 1940 as a six-unit multi-family complex, and when zoning became law there in 1974, the property was zoned R-15, but the property in question was grandfathered as a non-conforming use. Board of Adjustments minutes show that the units were rented long term from early 1992 to February 2004. The record further shows that in May of 2004, Dr. Dan Wilson, who was then owner of the property, applied for a zoning permit, and then, that October, obtained a building permit for renovations.

The renovations reduced the number of dwelling units from six to three, thereby reducing—but not eliminating— the nonconformity. The report further said that, as far as the Planning and Inspections office was aware, the property was used for long-term rental until a complaint about short-term rentals there was received in 2014.

Records show that the property was sold in 2016 to Chad Frazier to be used for short-term rentals, but with the change in ownership, the town contends that the property lost its grandfathering in the non-conforming use. According to Town Manager Shane Fox, the town began receiving occupancy tax payments on the property, Fox noting that prior to that, there were no records of such tax payments from the previous owner.           The Town contends that Frazier failed to do due diligence on zoning or to obtain rental records on the property before making the purchase.

The town’s actions took a turn when it was found that a 2018 amendment to the zoning law was not signed and recorded, and the town had to renew their action against Frazier in the summer of 2019. Frazier renewed his appeal on the last day, prompting the quasi-judicial proceeding now underway.

Frazier was questioned at last month’s hearing and his attorney questioned town planning and zoning officials late into the night. The session finally adjourned at 11pm.

Town Manager Shane Fox said the town will make their case mostly with four witnesses when the proceeding reconvenes Wednesday, February 19th, 5:30pm, and he said due to the large interest, it will be held in the American Legion Hall just behind the town offices.