Though the High Country was not severely affected by Hurricane Florence, our neighbors on North Carolina’s coast are still struggling to put their lives back together. Project: Hope has reignited its hurricane relief efforts to bring hope back to our own state’s coast and help hurricane victims in Beaufort, NC. Last year, Project: Hope filled the back of a Sysco truck and sent it to Texas to help those affected by Hurricane Harvey. This year, the Project: Hope is close to filling the tractor trailer before heading to the North Carolina coast the first week in November.

Project: Hope was formed last fall by Blowing Rock shop owner Sheri Furman to raise funds and items to deliver to victims of Hurricane Harvey in Texas. The project was extraordinarily successful and resulted in sending a truckload of goods to Texas and making a brief stop in Louisiana. Last year, Project: Hope involved weeks of collecting donations from the community and restaurants, attending home football games, and more outreach efforts in order to fill the truck. It was a strenuous, taxing project that reaped great reward for the town it was delivered to—originally just a one time project. Sheri says, “I was not planning to start Project: Hope again this year. I told God, ‘No way.’”

However, a month later and Project: Hope has nearly filled another tractor trailer of hurricane relief items. The Project Hope team has partnered with Food Lion in Blowing Rock to make pre-made bags around $20 each for people to purchase with their groceries. These bags are then picked up by the Project Hope Team and delivered to the truck on Sunset Drive. “We have been so fortunate to partner with Food Lion of Blowing Rock two years in a row,” says Sheri. These bags have been one the main resources for filling the truck this year.

It’s not just about collecting donations. When Sheri thinks about her decision to restart Project: Hope, she talks of three clear signs from God as being the catalyst to this year’s efforts. “Doing nothing is not an option,” she states firmly.

The truck is set to be delivered to the coast the first week in November but there is not a specific location yet. The Project Hope team plans to hand deliver their items and stay a few days to help people rebuild their lives in any way they can. “If we have to close the shop down for a few days then that’s what we will do,” says Sheri. It’s not just food and cleaning supplies, it’s hope, grace, and love to people who need it the most, too.

Project: Hope is still accepting donations listed on the attached flyer at First Baptist Church of Blowing Rock (350 Sunset Drive, Blowing Rock, NC 28605) until Friday. Pre-made bags will be available at the Food Lion in Blowing Rock until the end of the month, and the Project Hope Team is happy to pick up donations from you. For more information, visit @ProjectHopeBR or call (828) 295-3444 or (828) 729-8424. 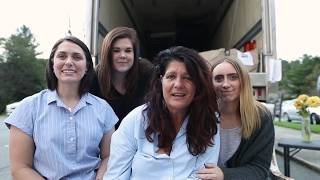