Feb. 16, 2015. There is no denying that “Fifty Shades of Grey” is one of the most controversial films of its era. Before this film, I had never encountered protesters outside a movie theatre, and yet here I was having to overhear from a group of loudmouths that the film glorifies sexual violence against women. Protesting outside a movie theater is counterproductive because it just tells people that there’s a spicy show inside. The only way these people weren’t giving the movie free publicity is if they were being paid to advertise with reverse psychology. 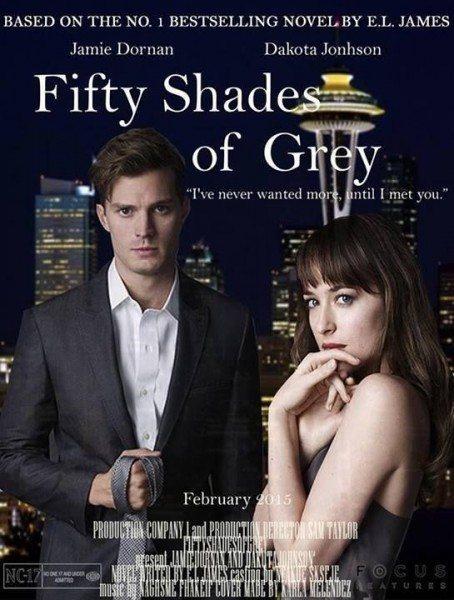 The story follows the relationship between shy college student Anastasia Steele (Dakota Johnson) and mysterious billionaire Christian Grey (Jamie Dornan). She awkwardly interviews the imposing figure for a school project and he takes an interest in her. THey have a few meet ups that he insists are not dates and they wind up back at his penthouse.

Only after she signs a non-disclosure agreement does he reveal that the only relationship he wants is one where he is  sexually dominant and she is submissive. He does this, by the way, with spoken words and the visual of a “playroom” full of whips and such. There is nothing forceful or intimidating about it; he asks her very respectfully if he can treat her disrespectfully.

For the rest of the film, Anastasia struggles with … ropes on occasion, but also the decision of whether or not to sign a contract that will officially enter her into the proposed relationship. Both characters are presented as smart, so I assume both regard the contract as strictly symbolic – no way that thing is holding up in court.

Surprisingly, it’s Christian who goes further out of his comfort zone, making repeated romantic gestures to try and woo Anastasia, even though he says he is inherently opposed to a traditional relationship. But Anastasia makes some compromises too as she tests the waters of her possible role as a submissive, and it’s here that we get that “sexual violence against women” that raises red flags.

So little of the “sexual violence” that these two engage in is actual violence. It’s more about the illusion of violence as the players fulfill their roles as dominant and submissive. Christian actually uses a feather on Anastasia at one point. I don’t mean poking her with the quill, I mean “dominating” her with one of the softest things on earth (and one of the prettiest – it’s a peacock feather).

There is a scene late in the film where he uses unmistakable violence, but it has dire consequences for both parties, not “glorifying” the act in the slightest. Though I do have to say that it’s odd that Anastasia is so shocked by Christian’s actions in this scene. It is not unreasonable for her to reject these actions, but at this point in the story she shouldn’t be surprised that they are in his wheelhouse.

The violence in this film is underwhelming and so is the sex. This is very clearly an R-rated movie that is very afraid of getting stuck with an NC-17. The film goes ridiculously far out of its way to only show the sides and backs of the characters’ bodies and only for a strictly-regulated amount of time. Make no mistake, the sex scenes are there, but given the reputation of the bestselling book, I was expecting the film to be more risqué.

“Fifty Shades of Grey” is, at best, a silly movie. The only possible joy it brings is shared laughter over how desperately it’s trying to push the standoffish Christian Grey as an exciting character. It’s also riddled with bad dialogue (the semi-titular line is terrible, but I never recovered from an early bit that compares a GPS to a GPA). As dirty as this movie is supposed to be, the dirty little secret that it doesn’t want you to know is that it’s just weak.