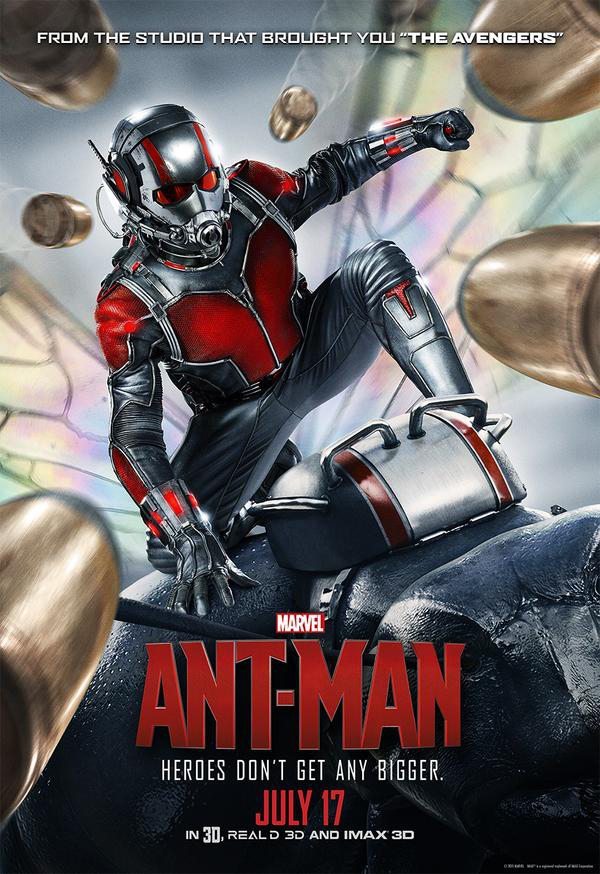 “Ant-Man” is the second movie this summer for the Marvel Cinematic Universe (which at this point pretty much means the world of The Avengers), and it serves pretty much the same purpose as last summer’s second MCU movie “Guardians of the Galaxy.” Each year brought us two MCU movies: the first with one or more of The Avengers, the second with someone new, but still connected to The Avengers. Marvel wants us to know that they’re not limited to The Avengers, they’re just not going anywhere. Another thing this movie has in common with “Guardians of the Galaxy,” they’re both among the funniest movies of their respective years.

Paul Rudd stars as Scott Lang, an ex-con who stole from his greedy employer and redistributed the wealth among people who were cheated. He can’t get a job now because prospective employers don’t see past the “stole from his employer” part. He’s not even allowed to visit his daughter, who loves him unconditionally. His friend Luis (Michael Pena) tells him about an unguarded safe belonging to an old rich man who has plenty of money anyway. Scott has sworn off stealing, but he’s desperate, so he breaks into the safe only to discover that it merely contains a bodysuit and a helmet. He steals them anyway.

The safe belongs to Dr. Hank Pym (Michael Douglas), a scientist who used to work for Howard Stark (as in Tony “Iron Man” Stark’s father). Pym has developed the technology to shrink people, which increases their speed, strength and stealth. He had a falling out with Stark, left to start his own company, got forced out by his protégé Darren Cross (Corey Stoll), and now devotes his time to honing his Ant-Man technology so that someone can put on the suit and stop Cross, who barely hides his villainous tendencies. Pym is too old to put on the suit himself and he won’t risk the safety of his daughter (Evangeline Lilly), but the thieving-but-good-hearted Scott seems to be a good candidate.

Of course Scott eventually agrees to become Ant-Man, but the film works better as a plain human comedy than it does as a superhero movie. Paul Rudd had a hand in writing the script, so he was able to combine the character’s voice with his own, resulting in an unusually heartfelt performance. He, Douglas, Lilly, and an army of trained ants have good chemistry as they get acquainted and you won’t mind the film putting the larger plot on hold for a bit. There are also some decent gags with Scott’s unsuccessful run at an ice cream franchise and some scene-stealing antics from the Pena character. I’ve heard people complain that the character is annoying and I can see where that could have easily been true, but Pena is just so endearing in the role.

The film works hard to remind you that it’s part of the MCU, especially when it comes to The Avengers. I’ve already brought up Howard Stark, but the connections only begin there. Scott asks Pym why he can’t just call The Avengers to help stop Cross, and Pym shoots down the idea (I can’t help but wonder how the suggestion would come off in other non-Avengers movies. Imagine if James Bond pulled that). Ant-Man actually battles a lower-tier Avenger at one point whose mere presence will get a rise out the audience. And there are some ending and post-credit sequences that promise more Ant-Man/Avengers crossovers to come.

As a superhero movie, “Ant-Man” doesn’t break any new ground (which is ironic given the function ants usually perform). The setup isn’t unique, the characters are typical and predictable, and except for a few gags involving oversized items, the action is brief and unmemorable. But when it’s not trying to be an action movie, the film is fun and makes for a blast of an experience.

“Ant-Man” is rated PG-13 for sci-fi action violence. Its running time is 117 minutes.