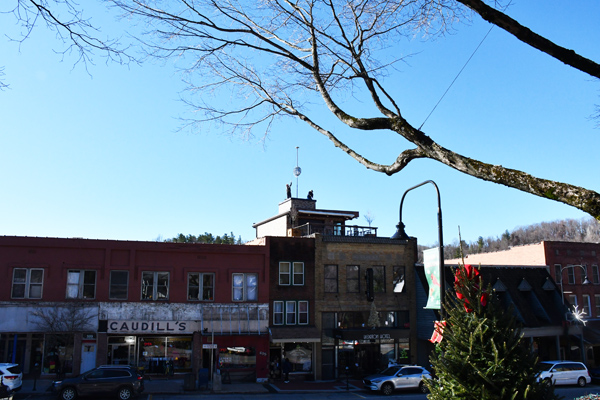 Downtown Boone is going to have its very own ball drop celebration for the New Year on Tuesday night.

“We will open our doors to the public at 6 p.m., first come first served with no reservations,” said hotel co-owner Denise Lovin. “We will have New Year’s bling for folks that come in and we will have live music by Jim Fleri of the Lucky Strikes. We’re going to serve our wonderful beverages and snacks and we will have a complimentary bubbly toast to ring in the New Year as we will count down together with the first-ever ball drop from the rooftop.”

Seating will be limited on the rooftop.

On Monday afternoon, hotel co-owner Fulton Lovin, along with Elijah Davenport, were on the rooftop rigging up some cables and pulleys to make the ball drop become a reality for Tuesday night’s celebration. At its peak, the ball will be 18 feet above the rooftop. The ball will be covered all over in Christmas lights.

“It took a little bit of trial and error, it wasn’t too bad,” Fulton said as he was continuing to figure out the plans for the night. “We’re still debating when to start dropping the ball since we only have to drop it 18 feet.”

Denise said that the idea for doing their own rooftop ball drop was something that came together pretty quick.

“We’re always wanting to do things that are new and exciting or us and the town, so Fulton thought he could engineer that. It’s nice to have him on hand not just for his creativity, but his ability to implement things quickly, so we decided why not just try it,” she said. “We hope people will bring the celebration to downtown Boone to have our own ball drop here in our own town.”