April 3, 2013. Despite some rather unspringlike weather in recent weeks and significant damage during the Jan. 30 flood, it appears the Watauga County Parks and Recreation Department will have their ball fields ready to go by April 15 thanks to a lot of hard work.

According to Parks and Recreation Department Director Stephen Poulos, county crews, volunteers and even prison work crews have been working extremely hard to get fences repaired and infields filled back in with brick dust in preparation for tee ball, youth baseball, youth softball and adult softball leagues.

Some of the fields, such as Industrial Field behind the fire station and the Anne Marie Fields, sustained quite a bit less damage than others, Poulos said. The Parks and Recreation Department is not planning to repair the fence at Industrial Field due to the extent of the damage and the fact that a fence there is not critically necessary.

The fields that were hit the hardest were the ones near the Optimist Club. Poulos said fences have to be replaced and infields have to be built back up there. He also noted that Optimist Club is helping with some of the materials and that Parks and Recreation crews, along with prison crews, will provide the labor.

Repairing all the fences and fields is certainly not cheap, although an exact figure on costs is not yet known. However, Poulos said thanks to the help from volunteers such as Eagle Scouts from Appalachian State University and the help of prison work crews, it has helped to keep costs manageable. 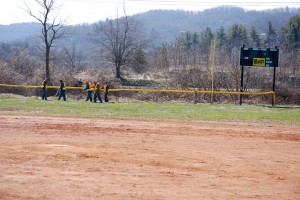 “If I had all my people doing that work or if we went out and contracted with a landscaping company or something it would be a whole lot more costly than what the prisoners are,” Poulos said. “These prisoners have been really good workers. We’ve had some prisoners in the past that weren’t exactly the hardest working bunch but these guys have done a really good job for us. We appreciate them.”

The prison crews get “paid” by way of the Parks and Recreation Department providing their lunch.

Poulos said the start of the season for using the fields is always a “moving target” due to the always unpredictable High Country weather, but said he feels good about the April 15 opening date. He noted that, technically, some of the fields that are in decent shape are already open and people have been practicing on them.

With rain in the forecast for tomorrow and Friday, Poulos said that might slow progress a little, but said as soon as the rain breaks they will be back to work getting everything ready.

For more information about what is going on with the Parks and Recreation Department, call 828-264-9511.