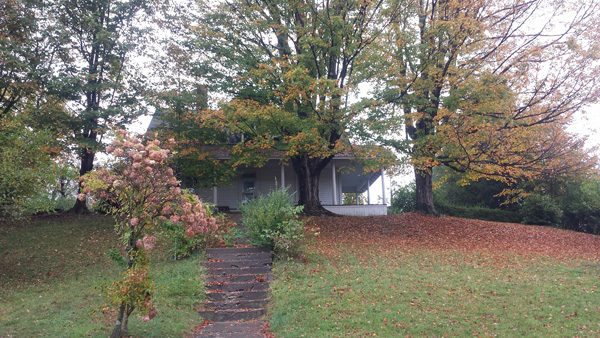 With a recommendation from the Historic Preservation Commission and approval from the property owner, the Boone Town Council will consider designating the Linney house and the former Linney Law Office in downtown Boone as historic landmarks.

Built in the 1890s, the Linney home is located between Queen and King streets, next to the post office in downtown Boone. Linney Street separates the residential property and the post office. The Linney home has an address of 219 Queen Street, while the law office’s address is 718 W. King Street. The two properties are adjoining.

The Linney home was built for the family of Frank A. Linney, a former U.S. District attorney and son of U.S. congressman Romulus Zachariah Linney, Sr. Author and playwright Romulus Linney resided in the house during the Great Depression and visited family in Boone, including his cousin Margaret Linney Coffey, the daughter of Frank A. Linney, according to this historical account.

After Linney’s death in 1928, the property was deeded Margaret Linney Coffey. Today, the property is still in the Coffey family. Frank and Joyce Coffey own the old home. Frank A. Linney was Frank Coffey’s grandfather.

Speaking earlier this year, Coffey said that his grandfather bought the five-room home in 1900 and expanded it into 13 rooms. He also built the two outbuildings, which became the law office on King Street and the washhouse, located adjacent to the house, closer to Queen Street. Coffey added there used to be a barn where the funeral home is today, where Frank A. Linney kept horses.

“The Boone Post Office wasn’t built until the ‘30s. In fact, our property goes to the middle of that road there. Used to be a walkway off our porch down the road, which wasn’t that far down where Linney Street is now,” Coffey said. “When the post office was built, they graded it down and had to put the walkway back up towards what we call the lodge.”

Asked if he planned on selling the home, Coffey responded, ‘Not while I am alive. My son will inherit the house, and I would like to get historical status on it.”

The draft ordinance that the Boone Town Council will consider at its monthly meeting on Thursday would designate the property as a historical landmark. If passed, a sign or marker would be placed on the property stating the designation.

The ordinance also notes that before any “demolition, alteration, rehabilitation, restoration or removal of any exterior elements of the designated property,” a review process under Article 8 of the town’s UDO would take place.

“In the event relocation, demolition or destruction of the property is authorized as provided by law, such action may be delayed up to 365 days as provided by Article 8 of the UDO and NC General Statutes 160A-400.14,” the draft ordinance reads.