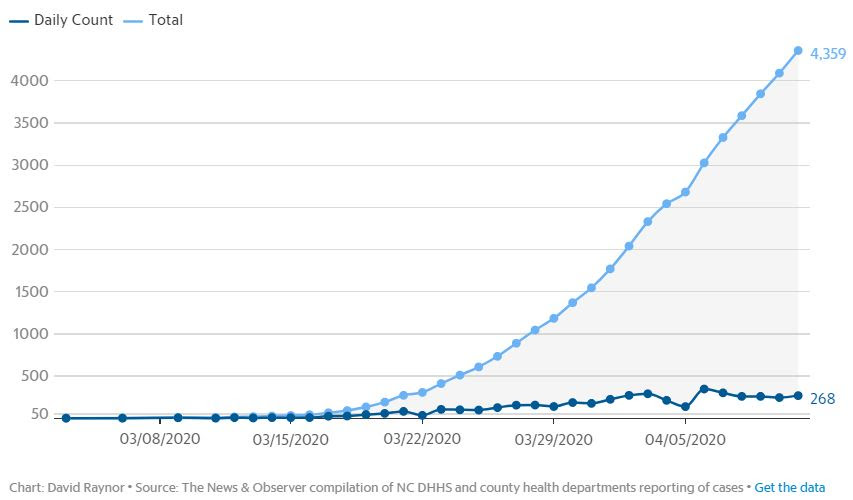 Let’s talk about how North Carolina gets back to work.

And let’s skip the obvious stuff – like hand-washing and staying home if we’re sick.

To fully reopen, we’re going to need to know four things: Who’s sick, who’s not, who’s been sick, and who hasn’t.

That’s the information that will let us track and control future localized outbreaks (which are inevitable) without requiring wide-scale shutdowns.

It will also give the public confidence that it’s safe to become customers – not just employees – of restaurants, theaters, barber shops, airlines, hotels, sports arenas, food trucks, colleges and universities.

Having this information early is how South Korea was able to demolish the infection curve and reopen society much faster than any other country. And the way they got there was early, widespread testing – followed by aggressive contact tracing and isolation.

But we can’t just call that a failure a move on. We actually have to solve the problem, only now it’s much bigger because the universe of those who are potentially infected has grown by several orders of magnitude.

One more factor: The testing can’t just be widespread – it also has to be rapid. Waiting ten days for a result isn’t particularly helpful when that person can easily infect dozens more while results are pending.

So let’s take a close look at what it will actually take to get rapid, widespread testing in North Carolina.

Broadly speaking, there are two types of tests: molecular and antibody.

The molecular tests are the ones we’ve been using. You take a swab from the back of someone’s nose or throat, you extract the RNA, then you see if it matches the COVID RNA.

We’ve done about 48,000 so far in North Carolina (that number includes private labs, which are currently doing the vast majority of the testing). We did about 5,000 yesterday. 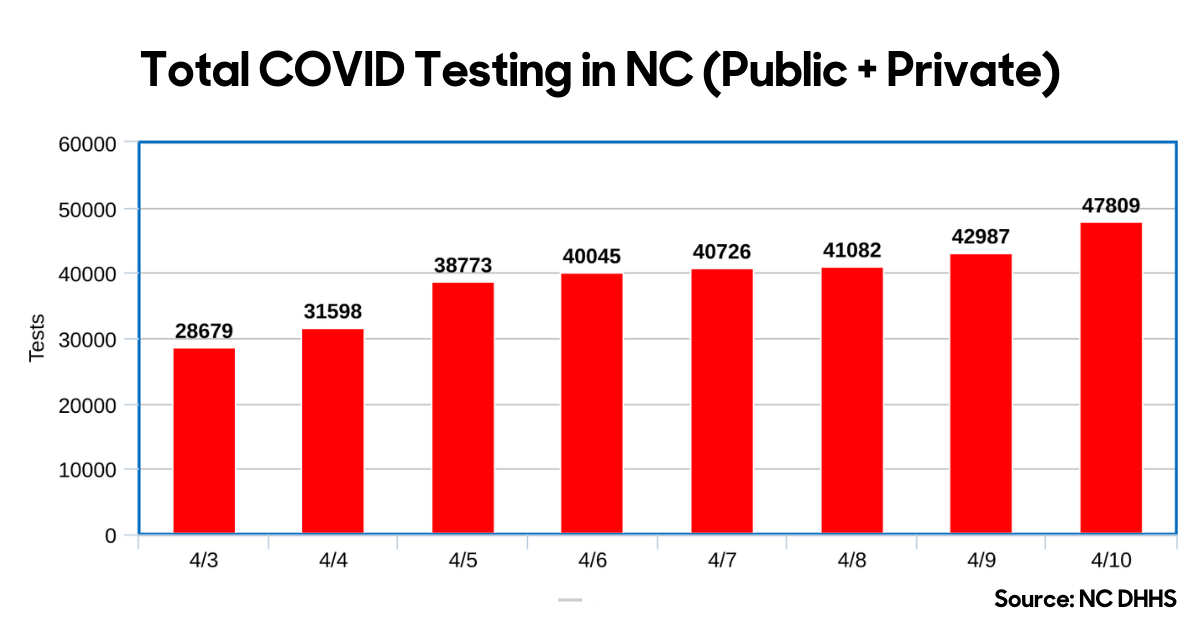 Molecular tests are highly accurate, but the global demand for them is so high that we’ve been plagued by a number of material shortages needed to perform them. The biggest shortage right now is the PPE needed to administer the test.

Our state has received three shipments from the National Strategic Stockpile totaling roughly 33% of our requested supply. Now the stockpile is nearly depleted and we’ve been told there will not be another shipment. In search for more, our state emergency management agency has submitted $125 million worth of bids on PPE to private manufacturers across the country but only a small fraction of those bids has been accepted. As has been widely reported, we are competing against other states and other hospital systems, and the competition is fierce. In better news, we have several manufacturers in North Carolina which have switched production to PPE for use by our front-line workers, so we hope that will help meet a growing share of the need.

That brings us to the molecular test kits (and related chemical supplies) themselves. We’ve seen a dramatic increase in private lab testing capacity in the last few weeks. But we’ve also seen real innovation. Most prominently, Abbott Labs now has a machine which will give a result in 15 minutes. It got FDA approval about ten days ago and is now probably the most in-demand medical device on earth.

Abbott says they can only make 400 of these machines per week for the foreseeable future. The federal government is in charge of allocating them to states. So far, most states – like North Carolina – have received 15 machines.

Let’s do some quick math. Over the next six weeks, Abbott should be able to make 2,400 of these machines. North Carolina has roughly 3% of the national population, so let’s say we get 3% of the machines (big assumption). That means we might get another 70 machines within the next six weeks, for a total of 85 machines. 85 machines working 24/7 at a rate of roughly 4 tests per hour = roughly 8,000 tests per day.

We tested 5,000 yesterday, so that would be a big jump for us. Even those assumptions are off by 25%, it would still double our current testing capacity. So getting more Abbott machines won’t be the whole solution for us, but it’ll be a big piece.

And don’t forget that other companies are also entering the space of rapid molecular testing. Just as no one was talking about the Abbott machine two weeks ago, the pace of innovation is such that two weeks from now we may have a new device to complement our Abbott machines.

Which brings us to antibodies.

This is more controversial, in part because it started as an overly optimistic theory that tried to downplay the need for a strong response to the coronavirus.

The theory was this: What if it turns out that a massive share of the population has unknowingly been infected already, and has since recovered, and therefore we really don’t need to worry so much and we can go about our daily lives?

Ok… so how would you test that theory?

Here’s how: You would do widespread, random testing of the population to screen for antibodies that would indicate whether the virus had already been there and had been successfully fought off.

But in European cities that have been hit reasonably hard by COVID, random antibody testing hasn’t shown the type of widespread infection the theory posed – which frankly makes sense, given how new the virus itself is.

But there remains a case to make for the widespread use of antibody testing. Different companies report different rates of accuracy, but most report that their antibody tests can detect COVID over 90% of the time. The tests are at the lower end of the accuracy range in the early days of infection, before the body has had time to build up enough antibodies to register with the test. But any COVID test with an accuracy rate above 90% – when the alternative may be no test at all – has to be seriously considered.

And while there is probably no chance that widespread, asymptomatic infection has already occurred, antibody testing at random across the state – or in certain vulnerable communities – might be helpful in identifying hot spots and letting us know where to focus our supply of molecular tests.

The antibody test itself is very simple. It works by doing a finger prick and getting a blood sample. And you get the results in minutes.

Currently the FDA only recommends the use of antibody tests for broader screening purposes to determine who has already had COVID, but there’s an ongoing conversation about whether the test can also be accurate enough to also be used for diagnostic purposes – that is, to see if someone with symptoms is currently infected.

So let’s say we wanted to incorporate some form of widespread antibody testing into our state’s tool kit for virus detection. Now the question becomes, do we face the same shortages that we currently face with the molecular tests?

Right now, there are only a few companies which have FDA authorization to distribute antibody tests. These tests are not yet available in the tens of millions, which is what you would need to create a national supply from which North Carolina would stand to receive an amount big enough to make a dent. But things are evolving rapidly and there’s renewed interest in antibody testing at the national level so this situation could be very different in ten days. Yesterday, Dr. Fauci said, “Within a period of a week or so, we’re going to have a rather large number of [antibody] tests that are available.” He suggested that these antibody tests would be used in addition to the molecular tests.

HOW MANY DAILY TESTS DO WE NEED TO PREVENT A RESURGENCE?

No one knows. Estimates vary wildly. But certainly multiples of what we’re doing now.

Here are three pieces of good news to end on: