We are winning the battle against peak infection. We can see that in the numbers. The statewide doubling time has gone from 2.5 days to 10 days. That means it’s slowing down.

Mecklenburg has not made quite as much progress. Our doubling time has gone from 2.85 days to 6 days – still slowing, but not as much as the rest of the state. That could be because of general density, or different levels of testing, or the presence of more specific hot spots like nursing homes, or some combination.

But let’s zoom out and look at the big picture for North Carolina. 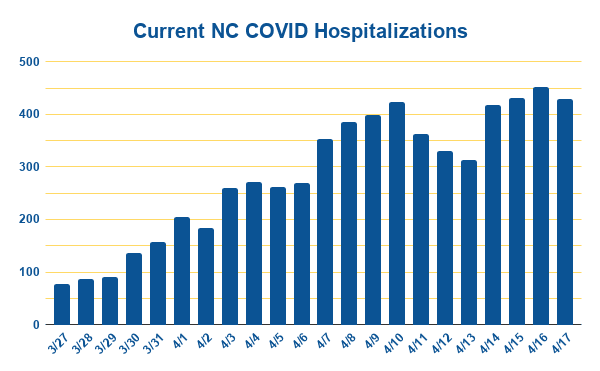 It’s been just over two full weeks since the stay at home order went into effect. That means we’re just now getting the earliest possible snapshot of the results (given incubation time + time it takes to get tested + time it takes to be hospitalized).

You can see that hospitalizations are not growing as quickly as they were two weeks ago.

If we continue to see the rate of hospitalization slow down, then that means we are on course to get past the peak while minimizing the loss of life in our state. In short, if we keep this up then we won’t max out our ICU capacity.

That’s a remarkable accomplishment, especially given that our collective action as individuals was overwhelmingly responsible for making it happen. This is a citizen-led pandemic response, and it appears to be working.

That means we’re now in a position to start having a realistic conversation about what reopening will look like.

WE ONLY WANT TO REOPEN ONCE

The early idea about when to reopen was that we first had to get past the peak and then watch the downward trend continue for about two weeks to make sure we had this under control. (And that’s currently the formal guidance coming from the White House, despite certain tweets suggesting otherwise…)

But in North Carolina we’ve got at least three different models for the state projecting different peak times, with one model saying our state peaked a few days ago and the model that Mecklenburg is using saying our county will peak in early June. The problem is that the more effective we are at flattening the curve, the more it will push the peak out.

That may be why Mecklenburg’s County Manager said this week that it might be possible to at least partially reopen before we know we’ve passed the peak, as long as we’ve severely flattened the curve and met other conditions (i.e., increase in testing) that give us real confidence that we’ve got this under control.

But keep in mind that from the standpoint of the rest of the state, Mecklenburg poses the biggest risk. We have twice as many cases as any other county. Our reopening will receive more scrutiny than anyone else’s.

Why the caution? Because while different models show different peak times, all the models we’re using agree on what happens if we let up before we have this under control: We get a viral surge that undoes all the sacrifice people have made.

Remember: The nightmare scenario from an economic standpoint is that we reopen before we’re ready, infection spikes, and we have to reclose. We cannot let that happen. We only want to restart this economic engine once because every time you turn it off it does a ton of damage.

And the only way we can reopen and remain open is if flatten the curve AND get widespread testing. Which brings us to…

We’re making some progress on this front. Take a look. 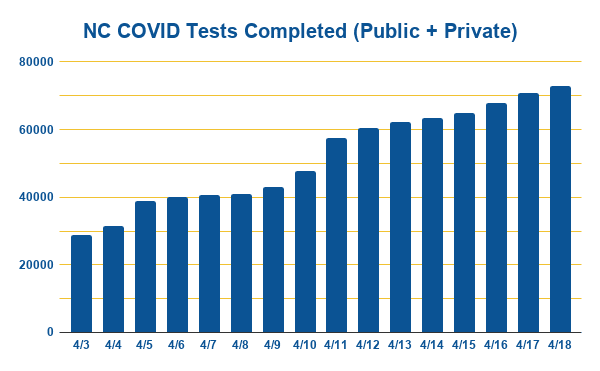 But Sec. Cohen (NC DHHS) says we need to at least double our testing capacity from here. That’s because once we reopen the odds of future localized outbreaks in North Carolina are 100%. When they happen, we’re either going to have to reclose OR have access to widespread testing that allows us to quickly identify and contain the outbreak.

There’s no third option. It’s reclosures or much more testing.

Right now the biggest bottleneck for testing is the PPE that health care workers have to wear to administer the tests. Yes, we still don’t have as many test kits as we’d like, but that’s not the critical shortage right now. (And specifically, the most critical PPE shortage we have in North Carolina is surgical gowns.)

The big problem here is that we’re still in a bidding war against other states. We’ve made over $150m worth of bids and only a fraction have been filled. This is now a national problem and it probably requires some federal coordination to solve. It’s the wild west getting your hands on PPE right now and we need a smarter approach. This directly impacts our ability to scale up testing, which directly impacts our ability to reopen and remain open.