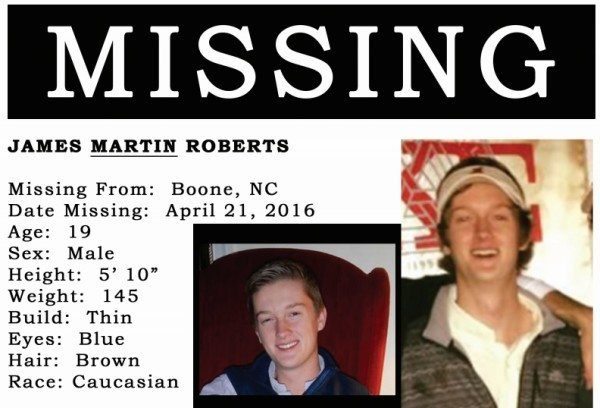 On April 21, 2016, James “Martin” Roberts was reported missing to the Boone Police Department by his roommates. This being the one year anniversary of Martin’s disappearance, the Boone Police Department would like to recap the efforts taken to find Martin during the last 365 days. Throughout the past year, many agencies and individuals have contributed to our investigation. It is obvious that people really care about Martin’s welfare and everyone wants to help bring him home.

Martin has not been located and, to this date, the law enforcement community has not received any confirmable information that would help find him. Many pieces of information have been learned and lots of people have called in possible tips and sightings. The search for Martin had led law enforcement to check tips as far as the Outer Banks and up into Virginia. The Boone Police Department has also worked with various agencies along the Appalachian Trail and as far away as Ohio.

Because there is no real information about Martin’s whereabouts, the Boone Police Department has been searching for him anywhere he could be found. Many land searches have been conducted by both officers and citizens. These searches have occurred in many locations within the High Country. The Boone Police Department utilized the North Catawba Fire & Rescue Dive Team during this investigation. This agency provided both personnel and specialized equipment to assist in the searches, including a rescue boat equipped with SONAR to search bodies of water. They also provided trained rescue divers to investigate anything discovered by the SONAR equipment.

The Appalachian State University Police Department has conducted several thorough searches of their entire campus and the areas surrounding. This includes all tunnels and rooftops.

Two separate teams of specialized human remains detection (HRD) dog teams have been used during this investigation. The use of these trained dogs allows searchers to cover more ground efficiently. One of these teams were used for land and another for water. The NC State Bureau of Investigation’s HRD dog teams helped search multiple land area locations on multiple dates. The Boone Police Department has also utilized Dr. Lisa Briggs’ HRD dog team. Dr. Briggs is a Criminologist with Western Carolina University and she owns a highly successful HRD dog named “Layla.” Layla is specially trained to search for human remains contained within bodies of water. Layla was used to search two bodies of water near the Blue Ridge Parkway. The North Catawba Fire & Rescue Dive Team again assisted with their personnel and equipment to assist in these water searches.

Early in the search for Martin Roberts, the North Carolina Highway Patrol provided the use of their pilots and a specially equipped helicopter to search densely wooded areas. This helicopter was equipped with a “FLIR” camera. FLIR senses infrared radiation that is typically from a heat source. FLIR was specifically used in this situation to search for human being or campfires.

The Boone Police Department is a small agency and has reached out to many public safety partners to investigate this case. Just some of the contributing agencies are the Appalachian State University Police Department, the Watauga County Sheriff’s Office, Blowing Rock Police Department, the NC State Bureau of Investigation and State Highway Patrol, the NC and US Park Rangers, the National Center for Missing and Exploited Children (NCMEC), and the National Missing Unidentified Persons System (NAMUS) and the US Secret Service. These are just a few of the assisting agencies.

The Boone Police Department held many meetings, as often as daily, during this investigation. On several occasions, the entire Investigations Division have met together and gone over the entire case completely to brainstorm any new ideas to investigate.

Where are we now?

Unfortunately, the Boone Police Department has not been able to uncover any confirmable or credible information that has allowed investigators to learn the whereabouts of Martin Roberts.

Where are we going with this case?

Want more details about this case?

For much more information about this investigation, including interviews with Martin Roberts’ father and the case investigators go to: http://www.thevanishedpodcast.com. Click on Listen / Episodes and scroll down to the Martin Roberts case.