Aug. 19, 2014. On Wednesday, Aug. 20, every Mellow Mushroom in the U.S., including the two in Boone and Blowing Rock, will be throwing back prices to reflect some of the original menu items and prices from 1974.

The day has been declared “Way Back Wednesday” and recognizes Mellow Mushroom’s 40th anniversary. 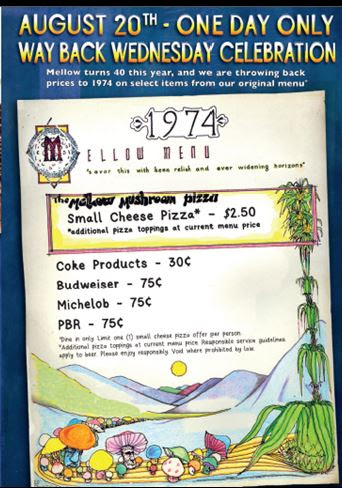 In addition to this special day, all month long, Mellow Mushroom will host a contest for customers to win a trip to Amsterdam for two. Customers will be able to pose with a backdrop in each Mellow of the first Mellow Mushroom location and post it to Instagram with #40YearsBaked or upload that image directly to www.40yearsbaked.com to enter. We already have over 850 exciting photos, you should check them out.

Mellow Mushroom Pizza Bakers will bring back selections from its original 1974 menu on August 20th in a “Way BackWednesday” celebration to mark the brand’s 40th anniversary.

Mellow Mushroom will also be hosting a contest for customers to win a trip to Amsterdam for two. Customers will be able to pose, in-store, with a backdrop of the first Mellow Mushroom location and post it to Instagram with #40YearsBaked to enter. Those without an Instagram account can upload their images to www.40yearsbaked.com

Mellow Mushroom Pizza Bakers has come a long way from its humble roots, born out of a single pizza shop in Atlanta during the freewheeling hippie culture of 1974. The founders had a simple dream: to make the most delicious, craveable slice of pizza on the planet.

Mellow Mushroom has recently expanded to more than 170 locations in 18 states, while retaining its mission of serving unparalleled pizza and cold craft beer in an unforgettable environment. Each Mellow Mushroom location is a unique, one of a kind design, with the same core menu. Mellow Mushroom Pizza Bakers is opening new restaurants throughout the country, including recent and upcoming launches in Atlanta, Washington, D.C., Dallas, Denver, New Orleans, Orlando and Miami.

The core of Mellow Mushroom’s menu is its handcrafted, stone-baked pizza made with wheat flour and Appalachian spring water-based mellow dough; tomato sauce made from vine-ripened, hand-selected tomatoes picked within hours of harvest; and part-skim aged mozzarella with no preservatives.